Wondering just how much time until the start of the 2022 Great North Run?

... well wonder no more - the count down timer below shows you exactly how much (or how little) time you have left to get in your training.

Will you be ready?

The following information details everything you need to know about the largest half marathon in the world. 57,000 runners are scheduled to take part in the 2022 event.

How long is the Great North Run?

As it is a half marathon race, it has a standard competition distance of 13.1 miles or if you prefer metric, that's 21.1 km.

If you want to be absolutely precise to the nearest 4 decimal places, then it's:

Want to know what route the great north run follows?

Take a look at the official course map below. There are also maps of the start and finish areas. 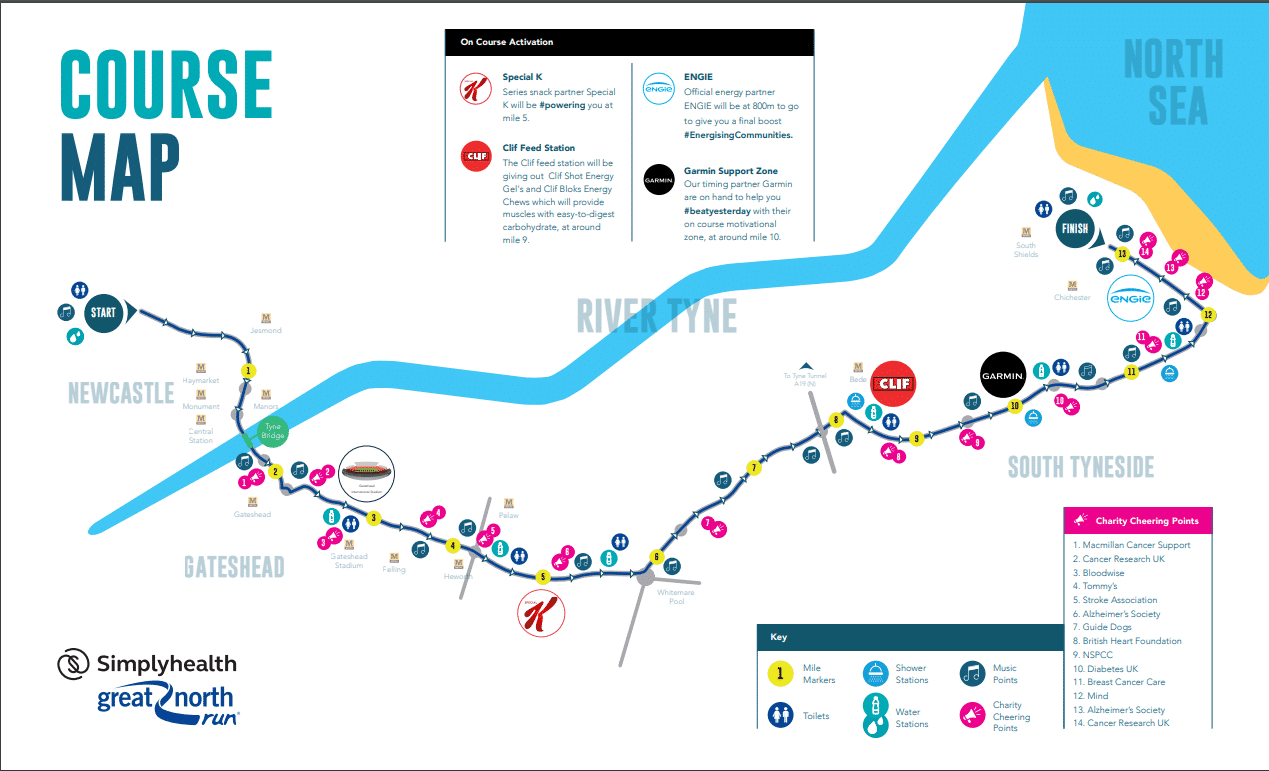 Video of the entire GNR Course

This time-lapse video shows the entire route of the the Great North Run.

How to enter GNR

The 2022 Great North Run is likely to reach capacity quickly as it is a very popular race. Also because the 2020 event was cancelled many runners are keen to get the race back in their running calendars again.

Usually their is a public ballot in January that you can enter from September of the previous year.

Even if you miss out on a ballot place. It may still be possible for you to get a charity place.

This will mean that you will have to commit to raising a set amount (about £500 usually) for the charity of course. Depending on the charity, they may also ask that you cover the entry fee (£50).

Getting To The Start

Because of road closures that are in place for the race, the best way to get to the start is to use public transport.

The nearest station to the start is Haymarket in Newcastle city centre. The start area is approximately a 15 minute walk away.

The closest station to the finish area is South Shields Interchange. Again this is approximately a 15 minute walk away.

Due to the size of expected crowds extra trains are usually scheduled for race day. But there are usually large crowds and lengthy queues too, and so it's advisable to allow extra travel time

If any of your family or friends intend to come along to the great north run to support you. They need to be prepared for huge crowds and only being able to get around slowly, due to stations and public transport being very busy.

Because of the problems and delays in moving around the course, I'd recommend that spectators choose one spot and stay there. As it's very likely that they will miss you, if they move around from place to place to try and get more than one glimpse.

In fact due to the number of runners that take part - there's a very good chance that they will miss you any way. It may be a better experience for them to watch the race on TV.

From about 09:30 the BBC traditionally have a special programme that covers the whole race live. With stories about ordinary runners and charity fundraisers sprinkled amongst the coverage of the top class international athletes battling for the win. There's usually highlights available later via the red button too.

Watching TV could give your supporters a better chance of actually spotting you amongst the throng of other runners. Especially if they have a reasonable idea of your finish time and can watch the finish line via the red button/i-player later.

Did you find this information useful? Don't miss out on getting more valuable information and running/training advice - sign-up to the Running Directions newsletter if you haven't done so already.